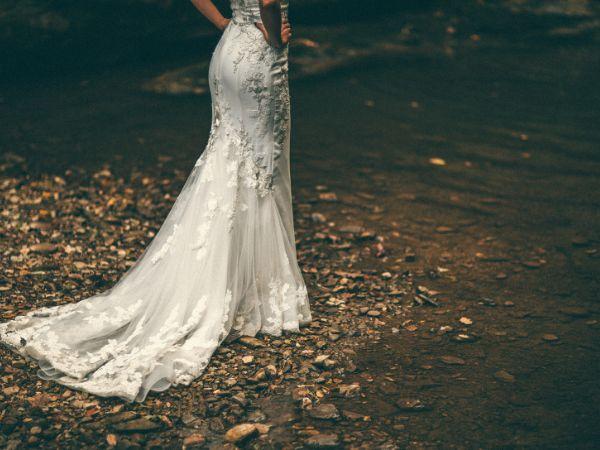 Grace Kelly, Princesse of Monaco, was a fashion icon. In 1956, Grace Kelly married Prince Rainier. This made her a Hollywood legend. Kelly, an American actress who had attended many awards shows, made her red carpet debut in a lace-and-silk taffeta bridal dress. This gown has inspired many other wedding dresses.

The regal veil, feminine lace details, and conservative gown made her a timeless bride. Sure enough, the royal wedding gown of Princess Grace of Monaco is still a favorite among brides, even decades later. Find out all about the gown’s creation and where it is on display.

After Grace Kelly was engaged to Prince Rainier, 1956, everyone had one question: Who would design the star’s wedding gown? Edith Head was a close friend and designer of Kelly’s. But, Helen Rose, an Academy Award-winning costume design who had previously worked with Kelly on four films including High Society and The Swan, was awarded the chance. According to reports, the gown took six weeks to complete and required 30 seamstresses. The studio’s wardrobe department handcrafted the elegant gown using more than 400 yards of fabric.

What was the cost of Grace Kelly’s wedding dress?

Insider reports that the wedding gown of Princess of Monaco cost $65,200 in 1956. This would have been the equivalent of $623,000 today. It is therefore one of the most expensive royal wedding gowns. Comparatively, Princess Diana’s famous gown for her nuptials with Prince Charles cost approximately $127,000 in 1981 or $490,000. Meghan Markle’s Givenchy modern wedding dress was $265,000 to make in 2018, or $276,000 today. Grace Kelly’s wedding dress cost came down to the materials. The multi-layered gown required over 100 yards of silk net, and included 125-year old Brussels lace, taffeta, and thousands of hand-sewn Pearls. The exquisite pearl and lace embellishments on the Juliet cap, which held Grace Kelly’s veil in place, were evident.

The Style, Form, and More

The unique silhouette of Princess Grace’s wedding gown is what makes it stand out. It features a high neckline and long sleeves made from lace, as well as a bell-shaped skirt that has a three-foot-long train. The gown’s details are amazing: it had an under-bodice and skirt support as well as a slip. The pleated silk faille skirt was composed of three attached petticoats, a foundation petticoat (ruffled petticoat) and a smoothing skirt. Finally, the three-foot-long train consisted of triangular tulle with a lace insert. The look was completed by a silk faille cummerbund.

Grace Kelly adorned her wedding gown with a variety of memorable pieces that reflected her personal style. Her headpiece was the most talked about. It replaced the traditional tiara. The embellished Juliet cap featured a wreath made of paper orange blossoms, and was decorated with pearls. The veil she wore, which fell from her cap, was a circular veil specially designed to keep her famous face visible for 600 wedding guests as well as the approximately 30 million viewers around the world.

Princess Grace also defied royal tradition and carried a book, rather than a large bouquet. She also chose simple lilies from the valley. The shoes were custom-made by David Evins. They had two-and-a half-inch heels and were embellished with seed pearls. (Kelly did not want to be taller than Prince Rainier III as their spouses were roughly the same height).

Grace Kelly’s wedding gown has been dissected, copied, and admired many times. However, there are elements to the Helen Rose gown that will always be unique to the original. The “wedding of century” was held at Monaco’s Prince’s Palace and Saint Nicholas Cathedral and was televised worldwide for all to see. There were many important details that the cameras didn’t capture. Here are a few.

Kelly was blessed with a luck charm.

David Evins was asked by Princess Grace to design custom pumps for her royal wedding. The designer delivered. Evins put a copper penny in the right shoe to bring good luck and engraved Princess Grace’s name into the left shoe. The right shoe had Prince Rainier III’s name engraved. Kelly didn’t have to tower over Kelly because the heel was only two-and-a half inches.

Her veil was created with TV cameras in view.

Helen Rose designed a circular veil to make Kelly’s face visible to her adoring fans. The veil had lace motifs appliquéd around the edges. A fun detail that paid homage to their romance was a pair tiny lovebirds.

MGM gifted the bridal book as a gift.

Kelly was not only gifted the gown, but MGM also gave Kelly a book of prayers to use during the ceremony. Grace Kelly Online claims that the book was Rev. J.M. Lelen’s Bride’s Manual – A Manual of Catholic Devotion including Mass for the Marriage Ceremony, and the Nuptial Burial. To match her wedding dress, it was decorated with silk, pearls and lace.

Kelly and Prince Rainier were married in a civil ceremony the day before. Kelly wore a less-known second wedding gown. Helen Rose also designed the dress. It was entirely made of taffeta, and then covered in French Alencon Lace, in a pastel pink hue. It featured a different silhouette, with a fitted bodice and a round collar jacket. The skirt was bell-shaped, with a hemline that reached around Kelly’s ankles. To complete the look, the bride wore a chic Juliet cap and delicate child gloves.